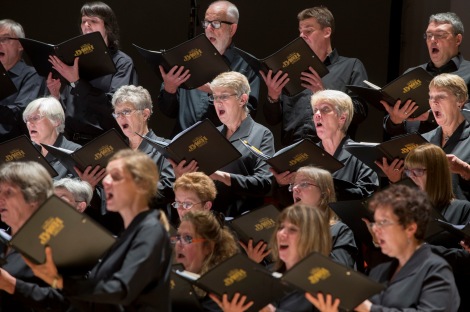 The atmospheric Carols By Candlelight (Saturday 13 December 2014, St. Francis’, Bournville, Birmingham) sees them joined by St Francis’ Children’s Choir to perform a range of much loved carols in aid of charity.

Beginning with a candlelit procession through the Bournville church, expect to hear such favourites as Once In Royal David’s City and O Come All Ye Faithful, plus themed readings from Pauline Round and Michael Lloyd.

Carols By Candlelight tickets are £12 (concessions £10), family tickets (2x adults and up to 3 children) £25, with all proceeds go to St Mary’s Hospice Fund.

This is followed by Nine Lessons And Carols (Sunday 21 December 2014, 4pm), a free/ donations performance at St. Paul’s Church in Birmingham’s Jewellery Quarter which finds the choir performing a range of material as part of a traditional church service.

Consecrated in 1779, the Grade I listed ‘Jeweller’s Church’ is famed for its painted window, depicting the conversion of St Paul, and for its association with famed industrialists Matthew Boulton and James Watt.

“There’ll be plenty of opportunities for the audience to exercise their own vocal prowess too, if they wish to join in.”

For more information on these and future Birmingham Bach Choir performances, see: www.birmingham.bachchoir.com

As one of the UK’s leading large chamber choirs Birmingham Bach Choir has been contributing to the musical life of the West Midlands since 1919, making it one of the oldest musical groups in the area. Although they perform music spanning over 300 years, their main focus is the Baroque period (especially JS Bach), plus 20th and 21st century works.

2013/ 2014 marked Birmingham Bach Choirs’ 95th season and included the World Premiere of a brand new choral symphony by Paul Spicer and Euan Tait to mark the outbreak of The Great War entitled Unfinished Remembering – a key event in the UK-wide First World War Centenary programme which debuted at Symphony Hall, Birmingham, to great acclaim in September 2014.

For more information, including details of forthcoming concerts, see: www.birmingham.bachchoir.com

For more information on the choir, interviews and review ticket requests, contact us: